I believe there are angels among us.... That's one of my favorite songs, and it never fails to give me goosebumps.  Have you ever had an encounter like the one described in that song? Something unexplained happening that kept you safe or gave you peace of mind at an unexpected moment?

I have met many people whom I have called an angel, and have often felt that pets are God's way of keeping angels nearby us.  But a few years ago I had an experience that has stayed with me all this time, and I had to write it down so I wouldn't forget any of it.

The story is not my usual style of writing, and it's not for everyone.  It's too short to submit to magazines and though I submitted it to a publisher of short, inspirational stories, I never heard back from them so I'm assuming they passed on it.

Rather than see it collect dust in the folders on my computer, I thought I'd share it here.   Yes, it's a true story and I have never been able to discover one way or another whether a youth group, did, in fact meet at my church that night.

The church I mention here has re opened as part of the Latin faith community, so it's still a Catholic church and we can still attend mass and see many of the same old parishioners, even though it's not exactly the same as it was (our beloved pastor has long since retired). But I'll take it! Nothing warms this Catholic mom's heart quite so much as kneeling at the communion rail with my boys (when they come to mass--teenagers!)

I hope you enjoy the read. 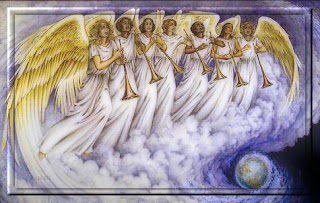 A Choir of Angels

It was well into fall, that time of year when the days are sunny and warm but the evenings turn chilly and night settles in before you know it.

It had not been a good year; my beloved father, in his third year of senile dementia, had recently been admitted to a nursing home.  My mother, living alone for the first time in her life, needed a lot of support and encouragement as she learned to do things for herself that Dad had always handled.

I was a stay at home mom with two young boys and it seemed my husband’s paycheck never quite stretched from one week to the next. On top of that, our church, like so many Catholic churches these days, had recently closed.  We’d found another church in a neighboring town, but I missed the old building we’d come to love, and the familiar faces around us in the pews each week.

One bright spot was the adoration chapel on the grounds of our beloved church where the Blessed Sacrament (the body of Christ, to Catholics) is on display for adoration and prayer each day. It remained open from early in the morning until ten every night.  Whenever possible, I liked to visit the quiet, peaceful little chapel and answer the call to “spend one hour” in silent prayer.

This particular evening had been especially hard.  Kids fighting.  Husband working late.  Bills not paid.  When my husband did get home, we argued, as exhausted parents do, over everything …and nothing in particular.  I longed to drive the thirty minutes to the nursing home and sob on my father’s shoulder.  But I knew he would be winding down his evening and readying for bed, and that such a visit would only upset him.

Besides even though the man I’d loved and adored my whole life—the one who could fix everything from broken dolls to broken hearts-- was still here… he was also very much gone. The Daddy I needed right now had slipped away from me, one memory at a time. So as my husband got the boys cleaned up from dinner, I grabbed the keys to the minivan and told him I was heading to the chapel for an hour.

The chapel was quiet when I arrived, only one or two other worshipers were inside, sitting in peaceful adoration. I knelt there for the longest time, praying, silent tears slipping down my cheeks, prayers on my lips, pouring out my heart to the only One who could understand.  By the time my tears had dried and my knees had gone numb from kneeling, the other worshipers had left and I realized it was dark outside.

The time had changed just a few days before, and night had come an hour sooner than I’d expected.  I sat there, thinking about my minivan parked halfway across the parking lot.  Ours is a quiet neighborhood, but there are few streetlights and now that the church had closed, there would be no lights in the parking lot other than those that lit the path to the chapel.  It would be a pitch black walk to my vehicle.  It had been such a pleasant evening that I’d enjoyed the stroll across the lot when I’d arrived.  If only I’d thought ahead and parked closer to the building.

I hesitated, wishing I’d thought to bring my cell phone or a flashlight.  I uttered a fast prayer for angels to watch over me as I gathered up my purse and tucked tear-soaked tissues into my jacket pockets.  As I reluctantly headed toward the front of the chapel, dreading the dark walk ahead of me, I heard doors opening and closing.  The excited chatter of boys and girls—teenagers from the sounds of them, filled the air along with the footfalls of many people entering the building at the other end of the hall, by the old Sunday school entrance.  A peek out the window showed headlights—lots of them—as vehicles pulled up and stopped to drop people off.

A wave of relief swept over me.  I quickly left the building, and though I saw no one actually coming or going, the warm glow of headlights and tail lights lit my way and the sound of young people talking and laughing filled the air.  By the time I reached my vehicle, I could hear piano music and singing. A youth choir? I didn’t even know we had one at our church, or that they still met here now that it was closed. Even in my distraction I couldn’t help but notice how beautifully those youthful voices joined together in a familiar hymn.

I entered my car safe and sound, feeling a bit silly for having been so worried.  Nonetheless, a grateful “thank you” was on my lips as I pulled into my driveway minutes later.  As my husband and I tucked our boys into bed for the evening, my heart was lighter, my troubles farther away.  Later, when the house had grown quiet and our sweet boys were sleeping, I told him about the dark parking lot, how nervous I had been and how relieved I was the youth choir had arrived when it had.

“Youth choir?” My husband looked at me with a puzzled frown. “We never had a youth choir.  And besides, since our church closed, all the groups meet at other churches now.”

They say God always answers prayers-- and I believe that with all my heart.  But I guess in the hustle and bustle of human life, we can be slow to recognize His goodness even when it’s right in front of us.  That night God not only answered my prayer, He sent me a choir of angels.