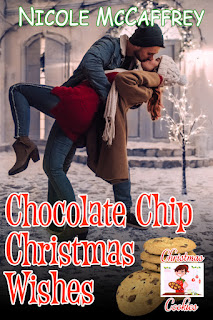 Have you ever been waiting somewhere, such as a doctor’s office waiting room, or in line at the grocery store or bank and someone just starts chatting with you—and won’t stop?

Writing is a lot like that for me.  One minute you are just minding your own business trying to check everything off the "to do" list for that day-- and then some character shows up in your head, pulls up a chair and starts talking.

(No, it doesn’t mean I need medication, LOL.  This is very common for writers.)

Jake Misteletoe was one of those characters for me.  Though I do have a couple of contemporary stories out, for the most part, I am an historical author with a head full of cowboys, sheriffs and soldiers and Civil War nurses and widows, even a female outlaw or two--so who is this guy who claims to be half human, half elf, of all things, and why does he want to tell me his story?

Well whether it made sense to me or not, he wouldn’t stop jibber jabbering.  I finally sat down to write what he had to say just to see if that would keep him quiet--and the words just poured out.  This was just for my own purposes, I had no thought of publishing his story anytime soon—again, historical author here.  Not North Pole, magic and elves.

Once that was done the story stalled for a while and I didn’t give it much thought until I heard about The Wild Rose Press series Christmas Cookies.  I knew my story would fit that series perfectly!  So I pushed myself to finish it and the result is a fun, lighthearted Christmas story called Chocolate Chip Christmas Wishes that adds a little magic to the season.

Turns out Jake is one of my very favorite characters ever, probably because he lived in my head for so long.  I am so happy the right opportunity to get his story out there came about.  I hope next time  you are in the mood for a little Christmas, you’ll consider reading this story.

Jake Mistletoe is the North Pole's resident bad boy.  Half elf, half human, he is the only child of a single mother who just happens to be Santa's head elf. Fed up with his wild, partying ways and lack of direction, his mother sends him to the real world for a dose of reality.

Lucy Prescott is all alone in this world.  Since the death of the grandparents who raised her, she has struggled to keep their Christmas novelty shop running in a dated, dying Christmas-themed tourist town.

When Jake appears in town, magic seems to be in the air. For the first time in ages, life holds excitement, and Lucy finds herself wondering … what if?

She studied him as he sat up. Unconscious, the several days’ growth of stubble and mussed dark hair looked sloppy.

But awake, that disheveled look gave him a devil-may-care aura. How had she missed the chiseled jaw line, the dark brows that framed eyes fringed with long, sooty lashes or the fact that he was drop dead gorgeous?

He looked around the room, wiped a hand over his face and turned a slow half circle on the couch, gaping at the racks of holiday ornaments, animated characters, motion-activated novelties and Santa figures that played Christmas tunes.

She cleared her throat to draw his attention. “Good afternoon.”

He yanked the Santa hat from his head and pulled a frown before tossing it aside.

For lack of anything else to say, she chose the standard, cheery greeting used by locals. “Welcome to Christmasville, where it’s Christmas all year long.”

He turned to her with eyes a startling shade of blue. “Let me guess. I died, and this is Hell.”