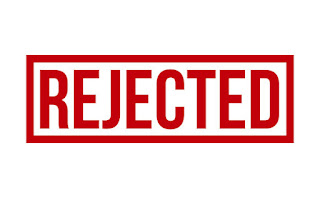 Rejection.  The very word can bring up all sorts of negative feelings.  We’ve all felt this way at one time or another, and it takes a lot of courage to take something you’ve put your heart and soul into and place it into the cold, uncaring hands of a stranger.

Getting a sterile rejection for that effort is disheartening.

It may seem a bit like I am focusing on the negative by talking about rejections, but let’s talk about them anyway.

They are a part of life in the world of publishing.  And they don’t get easier.

Plain and simply put: they sting.

Reminding you that they are not personal, they are simply part of the business is not going to help.  We all have to do what we have to do to get past it, sulk, rage, eat chocolate, vent to a friend.

But when that’s over and done with, it’s time to take a more practical approach and ask yourself  what  it mean. Why did your story get rejected?

Most rejections come in one of two forms:

1.       A basic form letter rejection that uses phrases like “doesn’t suit our needs” or “isn’t right for us at this time.”

2.      The revise and resubmit rejection.  This is where the editor addresses you personally, tells you what he or she would like to see you work on and asks you to resubmit the story again when you are done.

Because number one is so vague, it can often leave you wondering what you did wrong.   Okay first let me say this—chances are you did nothing wrong, your story just wasn’t a good fit.  And there can be several different reasons for that.

Remember in the first installment of this series where I talked about the importance of researching publishing houses? Well if you did that you may have found that some of them tend to favor a certain type of story.  I always encourage new authors to look for a publishing house that has published stories similar to your writing in style and tone.  But what do I mean by that?

Well if a publisher typically publishes sweet or very tepid romances and you submit something that’s smoking hot… chances are you are not going to get the outcome you desire.  Or if they only publish mainstream fiction, gritty war stories and spy thrillers and you submit a cozy mystery… again.  Not gonna end the way you want.

So sometimes a “doesn’t fit our needs” rejection is simply that you submitted something that’s not the type of story they typically publish.

And sometimes it means craft issues.  Sad to say but not every publisher is super fussy about writing craft.  Characters may shift viewpoints all over the page (also knowns as head hopping), and there may be a lot of narrative (also known as passive writing).  If that’s how you write, then that works for them.

So to submit a story with head hopping and passive writing to a publisher who specifies they only want one viewpoint per scene and are looking for stories with active writing is probably not going to end the way you want.

So this is what I mean by the “doesn’t fit our needs” rejection being a bit vague, it doesn’t always tell you what the reason was for the rejection and leaves you to sort it out.

And, yes, sometimes “doesn’t fit our needs” means there is sooo much wrong with this story we don’t have enough time to explain it all.

So take a long hard look at your writing.  If you really believe in your story, then brush up on some craft issues, or ask someone with experience to take a look at it, an independent editor or someone from a writing group. And remember to take any criticism in the helpful spirit intended rather than personally.  Yes it hurts to hear your writing isn’t perfect, but choose to learn and grow rather than lash out.

The second rejection is a bit more positive, though it’s not a guarantee that you are on the right track.  And the response to this one is tricky.

Speaking as an editor who has sent out these letters, sometimes you really enjoyed the story but simply want the author to eliminate some back story or brush up on some craft issues.  Yes you want to see the story again, but you are also interested to see what the author can do with it.  So if you get one such letter, take your time and make sure to really give it your all.  Do not, however, return the MS within 24 hours.  Even if you pulled an all-nighter and got all the changes addressed.

You will have rushed, and you will have missed something.  And chances are the editor is going to wonder why you were in such a hurry.  Here’s a tip. When we’ve just finished reading an entire MS and sent you a well thought out rejection, we don’t necessarily want to see it back on our desk again in 48 hours.  We’d like some distance from the story so it’s fresh again when we read it next time.  A couple of weeks, thirty days, even six weeks is a good amount of time. So do the changes, and let your story sit for a few days or even a week or more and then double check your work.  Slowing down and taking your time increases your chance of a positive outcome, especially since some editors will not look at a story a third or fourth time—if they reject you a second time, they most likely won’t ask to see it again.  We simply don’t have the kind of time it takes to hand hold someone through revising a MS.

So as I wrap up this part of the series, let me share some thoughts with you.  We’ve talked a lot about craft and professionalism.

The sad truth is the main reason a story is rejected involves craft issues. If not the writing technique itself, then because the MS was not clean of grammar, errors and punctuation or because the author didn’t know how to organize a plot or have any understanding of what it means to write a book.  They just sat down, wrote it, submitted and waited for the world to fall at their feet.

There is nothing wrong with taking the time to learn the craft of writing.  Think of it this way.  If you were seated on the runway right now, waiting for a plane to take off for a long-awaited vacation and your pilot came over the intercom and announced that this was his first time ever flying a plane and he was excited to be sharing this moment with you… would you stay put or run for the nearest exit?

If the plumber looking at your kitchen faucet told you he was pretty sure he could fix it, he just needed to look up some videos on YouTube to figure it out, would you still let him fix your sink?

Or if the doctor about to perform your knee replacement surgery told you he’s never done this before, but he’s seen other doctors do it, would you still go through with it?

Don’t submit your work to a publisher if you haven’t taken the time to learn the craft.

And it should go without saying, but since we started out by talking about professionalism… don’t burn your bridges.  No matter how much you disagree with what the editor said in your rejection letter, resist the urge to tell her to eff off or argue that she doesn’t know what she’s talking about.

We see this all the time and while we don’t take it personally, we do have very good memories. If you were rude and unprofessional the first time around, why would I look at your work again?

Okay so that will wrap up this part of the series.  I am not sure yet what next I will chat about next week, but stop back and find out!