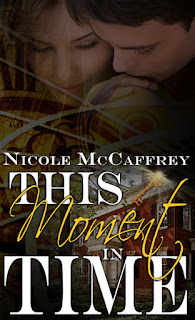 For the next few weeks, as I countdown to the release date for Chocolate Chip Christmas Wishes and Christmas in the Wylder County Jail (co-written with Kim Turner) I will be revisiting some of my older stories.

This week I am talking about my Civil War era time travel, This Moment in Time.

Not even captivity can sway Southern widow Josette Beaumont from spying for the Confederacy.  Under the nose of the Union army, she willingly risks her life to pass information to her sources.  Until a stranger appears in her bedroom one day with a cryptic message: stop spying or you'll die.  She has no reason to believe his warnings about the future, but his company is the only solace in her long days of imprisonment and his friendship quickly comes to mean so much more.  If only she could make the sacrifice he asks of her...

To hell with history, real estate mogul Jamie D'Alessandro has no intention of saving the historic mansion he's purchased, even if it is the home of a famous Confederate spy.  But when he steps into an upstairs bedroom of the old house, time suddenly shifts, bringing him face to face with a very beautiful and irate Southern lady.  Against his will he's drawn into her cause--to save the Confederacy.  But Jamie has a cause of his own.  According to his research the lady spy has only days to live.  Should he change history to save the woman he loves--or sacrifice life in his own century to be with her for This Moment in Time?

I am not sure where the idea for this story came from.  After immersing myself in my first historical story, I was longing for something a bit “easier” to write, i.e., not as much intensive research.

My mother was always after me to write a Civil War time travel.  Civil War stories are not easy to write. Despite the built-in conflict that comes naturally with north versus south, you have to contend with the fact that your hero and heroine will be separated for long periods of time.  After all, he’s off fighting a war and she isn’t.

At the time those house flipper shows were very popular, and I began to toy with the idea of a contemporary hero flipping an old house and discovering that the house—which he fully intends to destroy, despite assurances to the contrary—had once belong to a famous Civil War era spy.

But I had yet to discover my heroine.  So I did what I always do and just started writing the first thing I saw.  Jamie, the hero, creeping up the stairs of the old house because he hears a noise and—not realizing he has just slipped through a time portal—coming upon the heroine.  At first he thinks she’s a ghost but quickly realizes she can see him.

He soon becomes entangled in the drama surrounding Josette Beaumont, the heroine.  He does enough research to know she will soon hang for her crimes if he can’t convince her to change her ways.

And then suddenly, he is no longer able to reach her.  He has no idea why it happened or how to make it happen again. Can he travel back one more time to save her, or has he lost her forever?

This particular story was written with a specific word count in mind and whole I enjoyed the process, I felt I had to end it rather abruptly.  I did not keep my conflict arc as small as I could have and while I still love this story, I wish it was longer LOL.

But writing this story helped me decide what the next one would be.

It would be set during a battle in a town that had kept me fascinated since I’d first heard about it in grade school.

The battle of Gettysburg.