Welcome to yet another new weekly blog series. For the next few weeks, as I countdown to the release date for Chocolate Chip Christmas Wishes I will be revisiting some of my older stories. Starting with the story that began my career as a published author, Small Town Christmas. 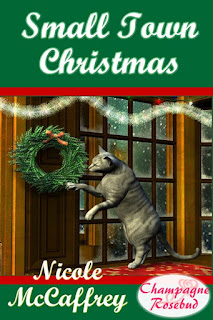 All Holland McCall ever wanted for Christmas or any other occasion was Tucker Callahan. Unfortunately, he was the high school jock and she an overweight, unattractive nobody.

But things have changed. Holly has left the small town they grew up in and made a career for herself, with plans to move on to even greater things.

Tucker, on the other hand, has just returned to town, divorced and the single father of two young girls. A visit home for the holidays and a chance encounter leaves both of them questioning everything they thought they ever wanted.

2006 was a year of change for me.  That summer my dad began to show signs of the illness that would eventually take his life (dementia).  My oldest son began school for a full day (our district was still doing half day kindergarten at that point) and my youngest was beginning preschool.

The Wild Rose Press had opened their doors that spring and they had a submission call out for Christmas stories to publish that year.

There was so much going on in my life, and the newfound time in my day once I got my youngest off to preschool left me feeling a bit unsettled.  If you’ve ever been a stay at home or work from home parent you know the “what do I do with myself now?” feeling.    I was not yet published and still wrote in my downtime, but I was not necessarily pursuing it seriously—there was no time.  I wasn’t sure I could sit down and write a Christmas story, and certainly not in just a few weeks.

But while out walking my dog one crisp fall afternoon, some people I hadn’t met before began talking to me.  No, not someone I met on the sidewalk, are you kidding, my dog was a hyper beast back in those days, he’d have licked anyone to death who got that close LOL.  Nope.  I mean in my head.

As they so often do, characters came and began to tell me their stories.  Holly was coming home for Christmas (the working title--turns out another story got contracted with that title before mine so I had to change it) to the small town where she had grown up and didn’t know how to tell her mom and Gran that she had taken a job on the other side of the country.  Tucker on the other hand was a single dad, newly divorced, and had just moved back home to raise his two little girls in the small town where they had grown up together.  Oh and there was a Christmas tree farm.  That’s all I had.

As the days passed, we walked (all of us, me, my dog, Tucker and Holly) they talked and I learned that Holly had always had a crush on Tucker.  They had been friends in high school, but Holly had been relegated to the “Friend Zone”.  Now she has lost a lot of weight, dyed her hair and is no longer the chubby bespectacled nerdy girl he knew back then. Tucker has also grown up and realized he may have been a bit shallow, but what guy wasn't at 17?

Tucker wanted to make up for lost time.  But unlike Holly his brief life in the Big City had shown him small town living was what he wanted.  Holly did not want to give up her career to move back to a place she had outgrown.

But how to get these two together?

So yes, very Hallmark movie ish, although I am not sure even Hallmark knew that back in 2006 LOL.

I wrote it and submitted it and much to my utter astonishment, it became my first published story.  It released on November 17, 2006; five days shy of my 40th birthday.