Christmas in the Wylder County Jail: The Wylder West series 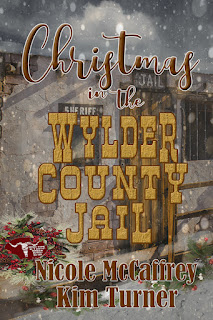 Well... if you are lucky enough that the other character belongs to a good friend, you both write the story!

This is exactly what happened to Kim Turner and me when we both were chosen to write stories for the Wylder West series. We thought it would be fun if her hero's uncle (Wylder Hearts) was having a secret-not-so-secret romance with my heroine's mother, who just happens to be the town madam. (The Wylder County Social Club)

We never expected for Uncle Russ and Miss Addie's romance to be so fun.  Or for readers to connect with them the way they did.

So coming this December--no date available yet--readers will finally get to find out how it all began with Russ and Miss Addie and does she ever agree to finally marry him???

Even more fun, their story is part of a three story "series within a series".  It's a week before Christmas and a train derails just outside of Wylder as the town is besieged by a whopper of a blizzard.  Sarita Leone and Laura Strickland have written the other two stories in the series.,  You will be hearing a lot about this Christmas mini series over the next few weeks, but for now... here is the blurb and excerpt from Christmas in The Wylder County Jail!

Adelaide Willowby is having a bad day. It’s a week before Christmas and she has just kicked out the love of her life. Her sister and her daughter are barely speaking to her, one of her best girls is getting married, and ownership of the Wylder County Social Club is in jeopardy. Now she has landed in jail—for murder.

Russ Holt has relied on alcohol to quiet the ghosts from his past for far too long. His latest bender has caused him to let down both Addie and his son, and he knows something has to change. When a stranger in town is found dead and Miss Adelaide is arrested for murder, Russ smells a rat.

Can he battle his demons, hunt down the real killer, and win back the woman he loves?

He glanced at the drink again. One small glass at a time or the whole bottle....it mattered little...Addie was right. He was no longer the man he even thought himself. Hell, he wasn't the same man as clear back to Sarah. And he'd loved her with all his heart, the same heart that broke when she'd chosen his brother Rick.

He'd left Wylder out of necessity, letting his brother raise the son that by rights belonged to him. But the shredding of his heart had come much later when he'd lost his second wife and daughter to a fire while out hunting. He hadn’t been drinking then, not even a little—and look what had happened.

He wrapped his fingers around the small glass and with the other ground out the butt of the cigar. He'd buried his wife and later his brother, though nothing had come close to the pain of placing his small daughter in the ground. He pushed the glass aside once more, the bronze drink the one thing between him and the hurt that never ceased.

But Addie. Her touch brought a calm to the storms inside his heart and eased his mind. This time, he'd seen it in her precious blue eyes. He'd gone too far. Something lost, hidden behind disappointment if he were guessing. She was done and he damn well knew it. The decision was now his to make...the bottle or Addie.