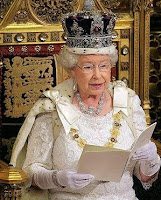 Queen Elizabeth II used the words Annus Horribilis in late 1992 to describe the particularly unpleasant year she and the royal family had endured.

Before I share why, let me just say this is not intended as a whine, or as a poor pitiful me story.  Nor am I in the habit of ever asking “why me?”  Quite the opposite.  It's just the facts, plain and simple.  So here they are, in no particular order.

Life changes.  Yes, it does.  My oldest son graduated from high school this year.  I did not expect it to bother me the way it has, after all, he is still here at home and going to local college rather than away.  But it’s still the end of something and the beginning of something new.  And it’s different.  And that is scary in its own way and very bittersweet.  My baby is, for all intents and purposes, a young man. An adult.  It’s still a little sad to drive past the high school and know he isn’t inside.  My youngest is still there but I miss dropping them off and picking them up at the same time, the laughter of their friends as they pile in my car for a ride home.  He is at the community college and doing well, far better, actually, than he ever did in high school. But since he doesn’t have his driver’s license yet, it leaves me to take him there and back every day.  Half hour out.  Half hour back.  Repeat at pick up time. Every day.  It’s exhausting and really eats into my work schedule.  I keep reminding myself it’s only temporary, by spring he will most likely have his license.  That leads to even scarier thoughts.  Let's not go there!

Two crazy old people.  Yes, I said that.  Tongue planted firmly in cheek, of course, but it’s true.  My in-laws have been in declining health for some time.  My father in law with dementia, my mother in law with physical ailments.  Sometime around May of this year she went to bed not feeling well and just chose to never get back out.  She spent all day every day alone in her darkened room, no TV, no books, just laying there.  My father in law has always filled the role of caregiver to her, she does nothing for herself, nor for anyone else.  (She's just not a nice person. I believe there are some mental issues at stake, but I'll save that for another rant).

By August she had been in bed for three months straight and not only was my FIL wiping her bottom and changing her bed and clothing several times a day, he was half lifting her into a desk chair with wheels to push her into the bathroom (he weighs all of 130 pounds).  Family dynamics being what they are, no one really knew what to do about the situation, especially with my FIL not letting anyone in the house (for fear, I suspect, we would see how bad it really was) or letting anyone go upstairs to see her (see earlier reference to personality to try and understand why it took so long for us to think this was anything other than a bid for attention on her part).  I finally had enough of the “let’s wait and see how she is tomorrow"  stall and called an ambulance over the objections of both my FIL and husband.

Long story short, she has been in the hospital ever since. Nearly two months now.  She can barely walk, she is completely incontinent and nuttier than a squirrel gathering acorns in the fall. She needs to be in a nursing home where she can get daily care, therapy, stimulation from being around others.  But what do you do when people don’t have enough money to pay for a nursing home out of pocket but have too much money for Medicaid to step in?  You hire a lawyer to try and get them coverage for the care they need.  Which means tracking down a whole lot of old paperwork in a house that is filled with years’ worth of junk.  (The IL’s are children of the depression who throw away nothing.  It borders on hoarding.)  And sometime around 2010 their filing system just went kaput.  Nothing was put away in any sort of order.  Just left in piles all around the house.  I know this because in my searches through said piles and files, the stuff that was put away “sensibly” ends around 2009 and the stuff thrown in in piles begins with paperwork from 2010.  Sadly while I can find a receipt for a color TV purchased from Sears in 1974, I have not been able to find documents of any real importance.

She is on a waiting list for a nursing home now, and the sad truth is, even once she’s in a home somewhere and settled, it's still not over because my FIL really should not be living alone.  So, we will need to find somewhere for him next, probably assisted living.  He is no longer allowed to drive so we take him where he needs to go, to the barber, to church, the grocery store, up to see my MIL.  I had to finally admit defeat on driving him to the hospital on weekdays when college started for my son, I just couldn’t drive them both to opposite ends of the county every day.  So now I pay friends to take him up in the afternoons and my husband picks him up each evening, brings him home and makes him dinner.  Which means I see my husband sometime six and seven a.m. in the morning before work, and around 8:30-9:00 at night, as I'm heading to bed exhausted and he is coming home from taking care of his father.

So that is what we've spent the past several months doing. I do have a sister in law, but she can’t be bothered to help with anything (see earlier reference to mom's personality.  That apple did not fall far, believe me).  I'm sure the minute my in-laws are are cold in their graves she will show up with her hand out, looking for her share.  There is a nephew, too, with all kinds of advice and suggestions. But no action.  It’s frustrating when family members who can’t take the time to visit  offer all kinds of helpful suggestions on what you “should” be doing without having taken the time to visit the hospital or really understand the situation. And it's always nice to hear how they'd love to help but just don't have the time.

And last but not least...

Senior Dog.  The last time I had a year this bad, in 2013 when my dad passed away, my best buddy was there every day nagging me to go for walks. We took lots of them and I sailed through the stress just fine, thanks to his persistence in helping me to pound the pavement and burn off some of what I was feeling. Now he is 12 ½, has trouble with his back legs and wakes us 2-3 times a night to go outside for a potty break.  Our daily walks are now limited to the end of the driveway and back a few times. I miss those long walks.  I miss the joy in his eyes as he sniffed new things or had a chipmunk skitter across his path.  And I miss fitting into my clothes, I’ve gained weight since my stress release has gone from dog walking to cookies and cupcakes.  But his eyes are still bright, he still plays with his toys every day and barks at the kids when they get out of line, as he always has.  I’m trying to savor these golden years with him and make them happy and restful ones but it’s exhausting and sad and I dread the day we have to say goodbye.

Anyway, if you’ve stuck with me this far, thanks for listening.  Not sure why I felt the need to post this, maybe I just needed the therapeutic release I normally would get from writing about fictional people and their struggles.

Please don’t get me wrong, I am grateful to still have my health (more or less-I have got to get on top of the cookie thing!)- my family, glad my dog is still here and my mom is healthy. I'm grateful for the way my kids have stepped up to help take care of their Grandpa, grateful to see the responsible young men they are becoming.

I certainly know others who are dealing with much, much worse than what I've described here. This is merely my annuus horribilis.  We all have them I guess.  I keep reminding myself that God is in control and He’s got this. I just need to stop fretting so much and let Him handle it.

Good thoughts as we begin a new week!