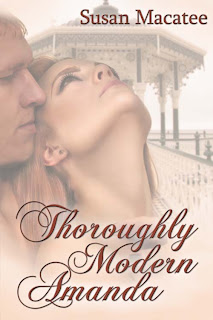 I'm very excited to have my friend and fellow American historical author here today, Susan Macatee.  I've been a fan of Susan's work for many years, now it's your turn to get to know this super talented and lovely lady.

Hi Susan!  Welcome!  Tell us a bit about yourself and why you write the genre you do.
I've always loved books and dreamed of being an author someday. But I came to my chosen genre in a roundabout way. As a teen and young adult, I devoured science fiction. So, that's what I first tried writing. It wasn't until years later, as a young mother, that I discovered romance. Times travels, followed by historicals, were my favorite escapes. Then my husband pulled me into Civil War reenacting. I love the romance of the period, as well as the grit, and just had to place my romances in this time period. As a result, my first romance novel was a Civil War time travel.

How long have you been writing?
I could honestly say since childhood. I remember writing picture books to distribute to friends. I had kind of a start in my early college years, when I tried submitting short stories to magazines and wrote for a 'Star Trek' fanzine. But it was after my youngest son started school that I joined Romance Writers of America and began to write both short stories and book length romance and submit my work to publishers. So, we're talking about 23 years.

Describe your typical writing day
My writing day doesn't start until afternoon, although I do a couple of email checks, plus a little book promo in the mornings. Once I settle down to write, I either have a word quota, if I'm writing a first draft, or a page or hourly quota, in the case of revisions, edits or plotting. I start with whatever project I'm currently working on, but if I have extra time before I have to start dinner, I might make notes on my next project before I stop for the day.

What was your “Aha!” moment—when you knew you had to write?
I took a creative writing class my junior year in high school. For my fiction assignment, I wrote a 12 page horror story and got an A++. My teacher would have read it to the class, if not for the length. From that point on, I knew writing in some form was something I was meant to do.

If you weren’t a writer, what would you be?
In college, I took a few elective psychology courses and did really well in them. I think I would've majored in psych if I wasn't fixated on writing.

What is your best cure for writer’s block?
The absolute best cure is to read a good book by another writer. Always gets me in the mood to get back to work on my own project.

Tell us a little bit about your new release, Thoroughly Modern Amanda

Thoroughly Modern Amanda is a sequel to my 2009 Civil War time travel romance, Erin's Rebel. This new story is set in 1880 and the heroine, Amanda Montgomery, was a child in Erin's Rebel, the daughter of the widowed hero. The hero, Jack Lawton, is a modern day construction worker who wants to refurbish an old Victorian home, but the owner dies and her heir wants to sell the land and have the house demolished.


Believing anything is possible, magazine reporter Amanda Montgomery dreams about being a modern woman in a nineteenth century world, much like her exceptional step-mother.  But society expects well-off young ladies to focus on finding a suitable husband and raising a family.  And then Jack appears—with no past and unconventional ideas. Does he hold the key to another century as well as her heart, or is she destined to stay in her own time?

Construction worker Jack Lawton wants to preserve an old home that's scheduled for demolition.  But when he sneaks inside for a final look, a loose beam falls on his head, and upon waking, he finds himself in the arms of a beautiful woman.  His only problem—he's no longer in the twenty-first century.  Can he find his way back home? Does he really want to?

Jack blinked, focusing his gaze. Blinding pain in the back of his head nearly caused him to pass out again. The last thing he recalled was a beam blindsiding him.

“Sir?” a female voice cooed. “What’s happened? Did the beam hit you?”

He tried to focus on a face hovering above him. “Yeah, the beam hit me. It must have knocked me out.” He lifted his arm, intending to probe his aching head.

“Don’t move,” the woman said. “I have a rag covering the gash. You need a doctor, I think.”

He gazed at the woman. With her red-gold hair piled on her head and her old-fashioned looking gown, she didn’t seem real. Like something out of a crazy dream. If her face wasn’t so smooth and youthful, he’d believe he was back at Mrs. Grayson’s house, but the old woman was dead and she’d never dressed like this.

“Where am I?” he groaned. A flash of pain shot through his skull.
The woman’s blue eyes widened. “You don’t know where you are? The beam must have taken your memory.” She glanced around. “This house is under construction. You’re obviously one of the workmen hired to build it.”

“Under construction?” A new wave of pain pierced his skull. “No. This house is going to be torn down.”

“Shh.” She placed a finger over his lips. “You must have had a memory lapse.”

Her soft touch and scent enveloped him. Something seemed familiar about her, but he wasn’t sure what. He tried to rise, but she pushed him back.

“No.” He rubbed his head. “I think I can sit up with your assistance. Pushing onto his elbows, he gazed around the room. His heart dropped as he realized this wasn’t the dilapidated house he’d been exploring. The scent of fresh cut wood and unfinished walls chilled him.

“You say this house is under construction?” He made an effort to sit up straight.

She moved to brace his back. “You mustn’t move so quickly. You could aggravate your injury.”

“This doesn’t make any sense.” He reached for the towel she’d placed against the back of his head. The rag slid down his back.

She retrieved it, then gently probed his head.

He winced at the pain.

Her gaze met his. “It doesn’t look so bad now. The bleeding’s stopped, but you will need someone to look after you. I’ll contact your family.”

“There’s no need. I can drive. Just help me to my car. It’s parked outside.”

“Car?” She bit her lip, drawing his attention to her full, ripe mouth. “You mean carriage? I saw no carriage outside.”

“I saw no carriage as you describe.” She wrung her hands glancing toward the open doorway. “I’ll go find help.”

His hand shot out to stop her. He didn’t want her to go, even to get help. If he was able to stand…

She frowned, but grasped his hand. Pushing up on his legs with her assistance at his side, he stood. But his equilibrium seemed off. She braced her weight against his.

“Are you sure you don’t want to stay here? I’ll find a neighbor to help you to go…” She hesitated. “Where do you want to go?”

“Home, but I need my car to get there.” His hand dropped to his pocket to search for his wallet, but a strap and two buttons on his waistband diverted his attention. He wore a pair of suspenders, a loose fitting shirt with four buttons reaching from his mid-chest area to his collar, and baggy wool pants. These weren’t the clothes he’d been wearing when he’d explored the house.

His alarmed gaze drifted down to the woman who still supported his weight. The clothes he wore matched the period of her gown. And the condition of the house, compared to the dilapidated building he'd been in, set his brain awhirl.

The woman’s eyes widened as she gazed open mouthed at him.


Anything else in the works you can share with us?
Yes, I’m currently working on a novella based on a minor character from my 2009 Civil War romance, Confederate Rose. In ‘The Physician’s Irish Lady’ the hero is a small town doctor, who served as a Union army surgeon during the Civil War. The heroine is an Irish immigrant on the run from a man she met in New York City, who tried to sell her to a brothel.

Leave a comment on this post for the chance to win a PDF copy of Thoroughly Modern Amanda and a $10.00 gift card for The Wild Rose Press.

Susan, thanks so much for visiting with us today!
at December 21, 2012

Thanks for having me, Nicole! I enjoyed sharing with your blog readers.

Hello There. I found your blog using msn. This is a really well written article. I’ll be sure to bookmark it and return to read more of your useful information. Thanks for the post. I will definitely return. Plots for sale in Hyderabad

Hi susan,
reat interview. Loved the premise of your story. I am an Aussie but I love reading about the Civil war, and you always depict it so well.

Thanks, Margaret! My new release is post Civil War, but of course, some of those characters lived through it, except for my time traveling hero, of course.

My random drawing has chosen Margaret Tanner as winner of the PDF and gift certificate.

Congrat, Margaret, and thanks to all who left a comment!

Happy holidays to all!