Wednesday on Writing: Peeping Tom vs. People Watching? (Or: I really need to get a life!) 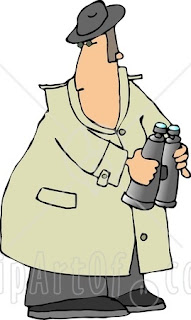 Are writers ever bored? I don’t think we are. I mean, sure there are times when we’re restless, but with people and plots living in your head, you're pretty much carrying around your own entertainment 24/7.

And as if that weren’t enough entertainment, there’s always people watching. Which is how I discovered The Black Family. I have no idea what their last name really is, and that’s not an observation about their skin color, that’s just what I call them.

Let me explain. As any of you who have visited here before know, I have two boys. Which is precisely why I sit in the last row at church every Sunday. It started out simply enough—it’s easier to take a wailing newborn, or tantrum throwing toddler out of the building when you sit near the door. Now that they’re older, I sit there because The Walk of Shame (when we leave after mass) is shorter –meaning there are less people to glare at me on the way out for the way my boys have behaved the past hour.

But the acoustics in my church are not all that great, and in-between my hissing “stop that!” or “sit/stand/kneel” I really can’t hear what’s going on up front. Which is why my mind wanders. And I people watch.

This is how I discovered the family referenced above. It started out as simply noticing the well dressed lady several rows in front of us. Maybe it’s because she never turns and glares when my youngest loudly demands “how much longer is he going to talk?” Or maybe it’s because I admired her red curls (my hair is fine and pin-straight; we always want what we don’t have).But after a while I noticed, hmm, she always wears black. If you were to throw open my closet doors, you would see a lot of black, too, so maybe it’s normal I’d notice it.

Most weeks she was joined by a young man I’m guessing (the red hair is a dead give away) is her son. I’m really not a voyeur, I simply noticed him because of his timing. He shows up at a quarter past the hour—you could set your watch by him—seconds before the reading of the Gospel. He also leaves (as does half the congregation) directly after communion. This is an old Catholic trick; technically, if you’ve heard the gospel and received communion, you’ve been to mass. But most of us consider it cheating. Eventually I began to notice that Mr. 11:15 also wears black—coat, shirt and shoes. Every week.

Okay, so maybe those are just their Sunday best, right? Oh, it gets better.

On holidays, the pair are joined by an older man I’m guessing is Dad. Because he has light grey hair and a stocky build, he looks like a Mafia Don, so he kind of stands out. And guess what? He dresses all in black, too. Head to toe.

Still, I was willing to concede that this was a family in deep mourning and leave it go at that. Until one day when I was out walking my dog. I passed Mr. Black—again dressed all in black—and he was walking his dog. It was black. I noticed, because it’s a newfie, and I love newfies.

Then he turned down the driveway toward what I assume is his house. Since this is my usual route with my dog, and I see their dog barking in the window most days when we go past, I’ve had time to notice a few more things. Like the fact that the house has black shutters. And both cars in the driveway? Black. The lawn furniture? You guessed it. Black.

It drives me crazy wondering what’s up with all the black? Is it their last name? Are they huge Johnny Cash fans? Mobsters? Color Blind? If it’s not a mourning thing, who came up with the idea—and how do you convince your family to only wear one color-- only buy things in one color-- for the rest of their lives?

It certainly must make it easier to get dressed in the morning.

The fact that I have mentioned all of this to my husband and he just kind of grunted and shrugged like it didn’t matter, makes me wonder if I'm crazy to wonder. How can he not find this interesting? Are writers the only ones who notice this sort of thing? Or am I just bored out of my mind?

Do you notice things like that about people you see on a regular basis? Whether it's the guy who rides the elevator past your floor every day who always carries an umbrella; or the woman who is always sweeping her driveway in her housecoat? And if so, do you ever start “what if’fing?” wondering at their motivation? Like "It's August, no chance of rain" or "how dirty can a driveway get in 24 hours?" There just might be fodder for some good characterization here, if only you knew what motivates them. Does he have toupee he fears getting wet? Does she have some OCD that makes her need to clean?

Lately I’ve noticed that Mrs. Black is no longer at mass every Sunday. And Mr. 11:15 still shows up for his half hour “drive through” version of mass.

You are a typical writer! LOL And I think that family needs to get into a book. You could have so much fun with them. My guess they are witches. There you go, more what iffing.

Oooh, never would have thought to put a paranormal spin on it, Paty.

Now it's going to bug me. Where has Mrs. Black gone? Is she sick? Off in Hawaii, walking on the black sand beach wearing a black bikini? Or maybe she's in Havana, learing to make black bean soup...

Love it that I'm not the only one who notices stuff like this. Thanks for the early morning laugh!