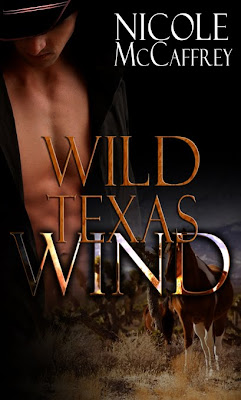 As some of you may have noticed on the sidebar, I have my cover for Wild Texas Wind. I'm thrilled with it, and while the cover artist couldn't find a guy with long, dark hair, like my hero, I love that she picked a guy whose hair doesn't show--and if I look close enough in those shadows around his collar, I can pretend his dark hair is there, LOL. And, I should add, the artist got everything else right. I always envisioned the cover to feature my hero, shirtless, in just a long black coat. Kudos to the awesomely talented Nicola Martinez.

What do you think? I love it!

Read on for the back cover blurb and excerpt.

All Raz Colt wants is land, a quiet peaceable existence and to put his life as a hired gun in the past. When the chance to earn a sizable fortune by rescuing a kidnapped heiress comes his way, he seizes the opportunity. Trouble is, the heiress doesn’t want to be rescued. Offsetting Arden O’Hara’s beauty is a rattlesnake personality and shrewish temper. Despite her claim that she faked the kidnapping so her fiancé would ride to her rescue, Raz knows someone is out to kill her. And if anyone gets the pleasure of wringing her lovely neck, it’s going to be him.

Arden O’Hara is desperate to go home. Her fiancé was supposed to ride to her rescue, proving it’s her–and not her father’s money– he loves. Instead an arrogant stranger, with weapons strapped gun-fighter low and a decided lack of sympathy for her situation, shows up spouting a ridiculous tale about someone trying to kill her. It’s infuriating when Raz Colt’s claims prove true after not one but several attempts are made on her life. She has no idea who this fast gun with the deadly aim is, or why he makes her feel as wild and untamed as the Texas wind. But like it or not, if anyone is capable of getting her home alive, it’s Raz Colt.


“Don’t say it, Colt.”
“No one else has reason to want you dead—other than me. But if you marry him and meet up with some convenient accident, Geoffrey becomes a very rich widower.”
She lunged at him, claws bared. “Bastard.”
Raz caught her arms and pressed her against the mattress. “The sooner you face the truth, the better your chances of staying alive.”
“I won’t listen to this.” She flailed , but when she couldn’t dislodge him, she attempted to put a knee to his groin. “Let go of me.”
He straddled her hips to keep the knee from connecting. “Not until you calm down.”
“I’m not going to calm down as long as you’re on top of me, you jackass! Let me go or I’ll scream.”
“You wouldn’t dare.”
She opened her mouth.
Pinning her arms, he had no choice but to muffle her scream with the only thing he had left. Leaning forward, he opened his mouth over hers.
In an instant everything changed.
at February 05, 2010

I LOVE LOVE LOVE that cover. The dark colors and the vivid golds are awesome! Lovely contrasting!

That was a fun excerpt. Sounds like Arden is quite a handful!

LOL thanks Sarah. Hugs back at'cha!

Yes, LOL, trying to be back anyway. Darn thing wasn't supposed to post until midnight--guess I've been away so long I forgot how to do it! *G*

Awesome, Nic. Great cover for a great couple of characters. Best of luck on this one. Let me know when it is in paperback, please...

Great story and a great cover!

Oh my gosh, you left us hanging like that? How could you?

Super cover, and you've already got me hooked. Congrats on the upcoming release!