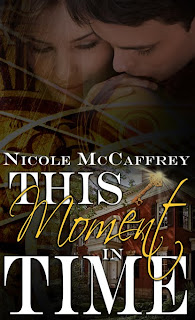 Not even captivity can sway Southern widow Josette Beaumont from spying for the Confederacy. Under the nose of the Union army, she willingly risks her life to pass information to her sources. Until a stranger appears in her bedroom one day with a cryptic message: stop spying or you’ll die. She has no reason to believe his warnings about the future, but his company is the only solace in her long days of imprisonment and his friendship quickly comes to mean so much more. If only she could make the sacrifice he asks of her…

To hell with history, real estate mogul Jamie D’Alessandro has no intention of saving the historic mansion he’s purchased, even if it is the home of a famous Confederate spy. But when he steps into an upstairs bedroom of the old house, time suddenly shifts, bringing him face to face with a very beautiful and irate Southern lady. Against his will he’s drawn into her cause—to save the Confederacy. But Jamie has a cause of his own. According to his research the lady spy has only days to live. Should he change history to save the woman he loves—or sacrifice life in his own century to be with her for This Moment in Time?

Excerpt: (Jamie's first night in the old house is interrupted by unexplained noises from upstairs. An investigation into the source leads him to an upstairs bedroom. )

He took another deep breath to slow his heart rate. While he was out gathering tools tomorrow, he’d have to get something to put over the window. He’d never get any rest with that door thumping all night long, and the air blowing inside would only make the house colder.
Chuckling at his own ridiculous fear, he started to turn. A voice—not the howling of the wind this time— and the sudden sensation of warmth at his back stilled him.
“Honestly, Sebastian, he can’t keep me locked up here much longer. I’ll go mad.”
A woman? She sounded calm, perhaps a little angry.
“Drat it, now I’ve lost count.” A heavy sigh followed. “The last I remember was twenty strokes, I’ll have to start over from there.”
Heart back in his throat, he turned just enough to glance over his shoulder. The first thing to greet him were the windows—the very same windows he’d admired moments ago. Only they were now adorned with white lacy fabric. To the left, a warm fire crackled in the fireplace, casting a golden glow across the gleaming hardwood floor. And directly in front of him, a dark gray cat lay sprawled across an ornate canopied bed, calmly grooming itself. It paused, tongue in mid stroke and stared up at him with curious green eyes.
“Twenty one. Twenty two. Twenty…”
Swallowing, he forced his gaze from the cat to the source of the voice. A woman sat at a vanity, tugging a brush through long, dark hair. In the mirror, he watched as her gaze moved from her reflection. To him. She let out a gasp. The brush fell from her hand. She whirled on her seat to face him.
“Wh—who are you?”
She could see him!

What a gorgeous cover!!! OMG! Seriously! The Cover Gods smiled upon you, lady!

Congrats on the upcoming release. Let me know when so I can mark it in my calendar! I'm so excited for you! ((hugs!))

Beautiful cover, Nic! This sounds like a fantastic story!

Ooh, nice! I love that cover. I'm REALLY looking forward to the book, but the cover is great!

Plus, I love time travels.

I'm with Isabel on this. And, uh, Susan and Paty and Sarah come to think of it.

Ladies, thanks for all the wonderful comments and for stopping by!

Hello Nic - congratulations! Another book out. Looks like an exciting premise, too.

I was very quiet for a couple of months with a wonderful case of shingles. Undignified name for a horrid infirmity. Almost better.

Hope all your boys are well, and I still think you girls who manage career and motherhood are super-people.