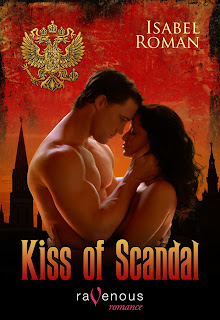 Wow, did you see that cover? As if August wasn't hot enough already!

Today's Friday Friend is someone I've had the pleasure of getting to know over the past several years, fellow Scandalous Victorian, Isabel Roman. Isabel has promised to give away a free .pdf of her latest release (I'm still drooling over that cover!) if we have ten or more commenters.

Welcome, Isabel, and thanks for spending your Friday here with us!


How long have you been writing?
Serious writing? Maybe 7 years. Seriously serious writing? Where I realized there were rules and reasons and that things were done certain ways in romance that weren’t done elsewhere? About 4 years. Takes a lot to learn the craft…especially now that I know there is a craft to learn!

Where do you get your ideas?
Everywhere. A twist on an old story I’ve read. Something I see on the news and think, oh, how can I work that in? Or better, take a modern day something and make it historical? Staring blankly outside a window works, too.

Describe your typical writing day.
I have two: One where I have the entire day, one where I work all day then write. The first involves copious amounts of red licorice and chocolate, pizza (fast and easy to heat and reheat) soda and V8 Splash/iced tea/water. Then I write (or plot the story) with minimal interruption for close to 12 hours. I then crash. The second involves me deliberately shutting off NCIS reruns and forcing myself not to turn the TV back on as I usually work on dialog or edit. This mostly happens during work days.

What was your “Aha!” moment—when you knew you had to be a writer?
I don’t know. I pretty much always knew, I think. I’m not sure it was one of those moments I can remember rather than something that’s always been with me.

If you weren’t a writer, what would you be?
I AM a librarian and business woman, lol. One day, maybe, with planning and work, my only paying profession will be writing, but that isn’t happening. YET.

Tell us a little bit about Kiss of Scandal.

It came about when my publisher, Ravenous Romance, asked if I could do something non-paranormal historical. Hmm, sure. I always have ideas bobbing along in my head. I decided on Russia during the Crimean War. Not a time or country often done, so the research was difficult but very enlightening, and ultimately very fun.

Blurb:
In the wreckage of a friend's death, Countess Katria Markova finds her perfectly ordered life, irrevocably altered. Russian politics proves more dangerous than the front lines of war, and when her fiancé’s future is threatened by rumors of treason, their cat-and-mouse game ends. In its place, a political game, where their very lives are at stake, begins.
Count Nikolai Orlov will do anything to clear his brother’s name. Anything except put Katria in harm’s way. Attracted to her from the moment they met, he’s spent their time together breaking the wall that surrounds her heart. He wants the passionate woman beneath, wants to shatter her cool exterior.
With her life in danger, Nikolai’s only course of action is to exact revenge. From the snowy streets of St. Petersburg to the River Neva’s icy depths, they search for the answers to clear Nikolai. But in their search, will they lose each other?
Excerpt:
“I expect venom to spew forth momentarily.” The deep voice rumbled from behind her.
She could feel his hot breath tickling her shoulder, skin tingling with awareness. His lips brushed the base of her neck, there and gone in a heartbeat. Scandalous in so public a setting. Heart racing, she forced herself to turn slowly, arching an eyebrow as Count Nikolai Andreiovitch Orlov joined her and Anatoli in front of the Jordan Staircase.
Her need to rush up to the state rooms vanished.
Drinking in his appearance, Katria kicked the hem of her heavy skirt as she faced him. Her focus left his eyes to graze down his tall, muscular frame. As tall as Anatoli, Nikolai towered over her. It was the look, however, the one she now knew he reserved for her, that aroused sinful thoughts whenever they met. She smiled.
“Count Orlov.” She extended her hand, but instead of delicately kissing the back of it, Nikolai raised his dark eyes to meet hers and kissed her gloved palm. Katria tilted her head and offered a cordial nod for the benefit of any who may be watching.
“Countess.” Nikolai offered his arm and they started up the stairs. Closing his other hand over hers, keeping her close by his side. Katria couldn’t say she minded. “The vipers are restless, slithering about the rooms in search of prey.”
The way he’d said prey, the hungry look he slanted in her direction, made her shiver. Her fingers tightened on his arm, and Katria was certain he noticed. Then again, everything about Nikolai elicited a reaction, the strength of his arm, the power in his smooth, deep voice. Now, as they climbed the stairs, his fingers brushed over her wrist, teasing the bare inch of skin between glove and dress.
“I’ve missed you,” Nikolai said. The words were so low, for a moment she wasn’t certain she’d heard them. Then he chuckled, and the sultry sound went straight through her.
Anything else in the works you can share with us?
Oh, lots! So many stories, so little writing time…

I just submitted a zombie romance story to Ravenous…no worries, this isn’t a romance between zombies, but between those killing the zombies. Kick ass all the way! OK, more like Night of the Living Dead meets Scooby Doo.

Currently, I’m working on an 1807 England-set story involving deception, treasure hunting, and mistaken identity. A little suspense with your historical romance and a lot of fun.

I’m also in the midst of plotting a series of stories for The Wild Rose Press that take place at the tail end of World War I. These are short stories with a romantic overall arc that plays out over the 4 (so far) planned shorts. Lots of tension, lots of romance, lots of dead people and deception. I’m picturing it almost like The Thin Man, but with spice.

Thanks for stopping by today! And thank you so much, Nicole, for having me!

You sound like one busy lady! Thanks for spending some time with us today.

To purchase Kiss of Scandal, or any of Isabel's other works, click here.

Hi Isabel,
that's a great cover! You are a new author for me and i do really like to read your book.
Mariska
cuniquas at gmail dot com

Thanks again for having me, Nic! And hey, Mariska. Welcome. Pull up a chair, I'll be passing out drinks in a bit. :)

Hi Isabel -- it was great to learn more about your work. Looking forward to your Got Wolf? story!

Great excerpt, Isabel! You really do have a lot going on!

Your story sounds great, Isabel. I love traveling to foreign countries and meeting their hero hunks. Best of luck in selling your story.

Does vacuuming really help release the muse? Darn, all of this time I thought watching Phantom of the Opera was the only way. ;)

I've already bought Kiss of Scandal (so don't put me in the drawing) now I just need time to read it.

I cannot believe how much you write while keeping a day job. It seems you have a new book out monthly (or more, at times) and I see that trend will continue.

Hi Isabel and Nic,
Enjoyed the interview, fellow Scandalous Victorians. How many irons do you have in the fire, Isabel? Sounds like you have lots of exciting romances in the works.
Congratulations on that! Enjoyed the blurb. :-)
Jeanmarie

Hi Isabel and Nic, I'm just now catching up with Facebook so am late getting here. Great interview and whew, cover. Yowza. And what a unique setting and time period, Isabel. I've got Russian in me so am totally putting this on the TBR list.

Thanks for stopping by everyone! I tried to get on yesterday, but it didn't work out as often as I'd have liked.

Yeah, I ADORE this cover! Yum.

Helen, I can't wait until the Got Wolf? story is released! I don't have a date for that yet.

It's great to see my fellow Scandalous Vics here. I always have a lot going on, it's one of those things where I don't want to sit still. Idle hands and all. :)

Tanya, thanks for popping in! I love Russian history, and this story fit so well with the country. :)

Comments are open until Monday morning for the give away!

I love NCIS. Can't get enough of Mark Harmon or Pauley Perrette. We won't get into my old Man From Uncle days and a very young David McCallum.

I never realized that there was a certain way to write a story. I'm glad you stuck with it as I love your books.

Thank you for putting my name in the hat.

wow thats one hot cover .looks like a great book will be butting it on my list of books to get.
sasluvbooks@yahoo.com

Thanks Gayle and Stacey for stopping by!

On an NCIS note, I adore David McCallum! Ducky is so so cool! I can't wait for the new season to start!

What a wonderful book jacket.
I wish you the best with sales and I hope got Wolf takes a leap the top of the best seller list when It's timel