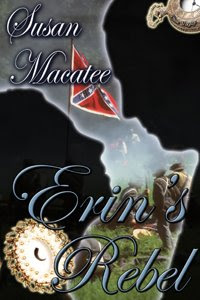 I think it's rather fitting that my first guest blogger for my new Friday Friends series is Susan Macatee. I've known Susan for about five years now and her journey from unpublished to multi-published author, whose first full length release is out today from The Wild Rose Press is particularly inspiring.

Tell us a bit about yourself and why you write the genre you do.

I write romance, primarily in the historical and historical/paranormal genres, set in the Civil War era. My love and knowledge of the Civil War period in American history compelled me to set my stories in that time period.

How long have you been writing?

Basically, I’ve been dabbling since grade school, but I started writing toward publication when my youngest son, now in college, started kindergarten. So, about 14 years.

Where do you get your ideas?

Facts about the Civil War and historical biographies inspired a lot of my stories, but I also get ideas from reading other novels, movies and television shows.

I do my best writing during the early afternoon hours, so after spending my mornings working out, running errands, taking care of household tasks, and checking email—after my half-hour lunch break—I settle down to my computer to work on my primary writing project. After an hour and a half, I take a short break, then usually switch to another project. I always have more than one writing project in the works.

What was your “Aha!” moment—when you knew you had to be a writer?

I’d always entertained the thought of writing, but it wasn’t until—after spending about nine years as a stay-at-home mom for my three boys—my youngest was starting school, that I decided I needed something of my own to do. I signed up for a writing course and never looked back.

If you weren’t a writer, what would you be?

I loved to draw as a kid and always thought I’d go into a field like design or illustration. And in college, I really liked the psychology and sociology courses I was required to take as part of my English major. I took a few courses beyond the basics as electives and considered majoring in one or the other for a time. So, I could have ended up as a designer, illustrator, therapist or counselor, if I wasn’t a writer.

Tell me your best cure for writer’s block?

Actually, I don’t get writer’s block, because I always work on multiple projects. If I get stuck or feel my enthusiasm ebbing on one project, I just jump to another and before long, I’m itching to get back to the first one newly inspired.

Tell us a little bit about Erin’s Rebel.

Erin’s Rebel is my first full-length romance. The story is a time travel, where my heroine, a modern-day reporter, travels to the year 1863. There she meets the hero, a Confederate army captain and the romance begins.

Blurb: Philadelphia newspaper reporter, Erin Branigan, is engaged to marry an up-and-coming lawyer, but dreams of a man from the past change those plans and start her on a journey beyond time. After a car accident, Erin wakes to find herself living in the 1860s in a Confederate army camp.

Captain Will Montgomery, the man of her dreams, is now a flesh and blood Rebel soldier who sets her soul aflame. But the Irish beauty holds a secret he needs to unravel before he can place his trust in her.

Can she correct a mistake made long ago that caused his death and denied her the love she was meant to have? Or is she doomed to live out her life with nothing but regret?

Excerpt:
The sound of her name on his lips made her skin tingle. She tore the paper off the package. At the sight of the brooch, her breath caught.

"Do you like it?" he asked anxiously. "I had it made just for you."

Eyeing him, she had a hard time finding her voice. This was Erin O'Connell's brooch, the very one that had sent her back in time. It shone in her hands, new and unworn from time and wear.

What did this mean? She must be following Erin O'Connell's footsteps. As far as she knew her being here hadn't changed anything. Will was still destined to die this year.

"No." She clasped the pin against her chest as the meaning of his gift sank in. "It just means so much to me."

His look of concern softened into a lopsided grin. "I'm happy you feel that way."

"Thank you, Will." She slipped the brooch into the pocket of her wrapper, then stood on her toes, lifting her arms to circle his neck. She kissed his cheek, inhaling his musky scent.

His mouth was on hers, hot and urgent. The softness of his moustache and chin beard tickled her lips. She opened to him, her tongue slipping inside to taste him thoroughly. He groaned, pressing the length of his body against her.

Anything else in the works you can share with us?

Besides Erin’s Rebel, I’ve got four releases coming out with The Wild Rose Press this year. The first is a short story, Angel of My Dreams, part of the Civil War romance anthology, Northern Roses and Southern Belles; another full-length Civil War romance, Confederate Rose; a stand-alone short vampire story, Sweet Redemption, that will be released as a e-book and a short Christmas story, The Christmas Ball, that will be part of a TWRP Christmas anthology, An American Rose Christmas.

Besides those, I’m working on two new full-length projects. One is a post-Civil War romance that’s a sequel to an earlier novel now out-of-print, the other is my first ever science fiction romance.

For more about me and my books, visit my website: www.susanmacatee.com

Thanks for stopping by, Susan! And congratulations on the release today!
at July 17, 2009

Thanks, Nicole! And thanks for having me on your beautiful blog!

Thanks, Susan. I loved my cowboy silhouette, but it was so dark, I wanted something brighter.

Thanks, Isabel! A lot of promo ahead for me.

There's nothing like a time-travel romance! Best of luck with your release.

Thanks, Skhye! I was hard to write, because I had such trouble getting the time travel element right for readers, but all my hard work finally paid off!

I think it came off as a really fun story!

Love the interview and loved getting to know Susan!

Nic, your blog is so pretty! I'm digging the colors and the title graphic. Great job!

Great interview, ladies, and your Blog is lovely, Nicole.

Wishing you loads of Sales, Susan.

Thanks everyone for stopping by, and here's wishing Susan lots and lots of sales!

And thanks for the nice comments on the blog, I wasn't sure if it all went together or not, LOL, I'm a pink kinda gal, but the dh calls my website the "barbie page" LOL so I figured I'd better steer away from more pink.

A fellow TWRP author by the name of Lora Darling made the title graphic for me some time ago. I really love it! Thanks, Lora!!

Thanks, Sarah and Lyn! And thanks again, Nicole for having me!

Susan it was great getting to learn more about you and hearing about your wonderful new release.