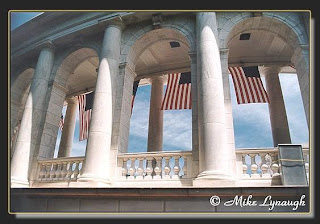 With a nephew serving in Iraq this summer, and our veterans marching in parades, I wanted to take a moment to remind everyone that this day is about more than picnics and cookouts. It's a day to remember those who made the ultimate sacrifice.

Some say Memorial Day began in Kingston, GA for both the Confederate and Union soldiers while the South was still occupied by Sherman's army. New York State was the first to officially recognize the holiday in 1873; by 1890 all northern states recognized the day. Many southern states refused to acknowledge the holiday and kept their own day to recognize their Confederate dead. Things began to change after WWI when the holiday--then called Decoration Day--expanded to include the dead from the Spanish-American War and WWI.

In 1971, Memorial Day was moved to the last Monday in May to give Federal employees a three-day weekend.

I hope you'll pause in whatever you're doing at 3 p.m. today for our National moment of remembrance and think about what this day really means.

I agree. Having a father who was in the Korean war and a son who has been to the Middle East twice, this is not a holiday our family takes lightly.

Thanks, Paty. I didn't realize your dad was a Korean War vet! But I'm with you for not taking the day lightly--I kind of feel the need to correct people when I hear them say "Have a great Memorial Day!" Or "Happy Memorial Day!"--but I don't, LOL. I know they mean well, but it's not supposed to be a happy occasion.

I agree with Helen- very well said! My dad and his dad were both in the service. My dad was in the Phillipines in Vietnam. Because of his service and subsequent diability, I was granted scholoarships to help pay for school. I will never forget what servicemen have done for us or the cost they paid for our freedom.