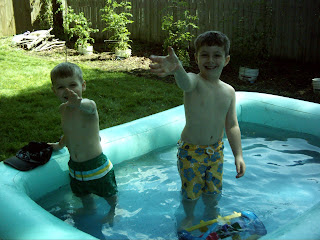 The fellow moms I talk to on the playground while waiting to pick my oldest son up from school and I have come to one conclusion about this school year – it’s lasted about a week too long. (Our kids won’t finish the school year until Wednesday the 20th. ) We’re all burned out--moms and kids alike. And while I know that sometime around the day after the Fourth of July I will decide I’ve had enough friggin' summer vacation, right now, I’m ready for the break.

Here, for my Friday Five, are the reasons why.

*Sleeping in. Not me – them! While my youngest will never be the “night owl” his older brother is – he’s a morning person, like me—there will still be some mornings when he sleeps past seven. And on the mornings he doesn’t, he enjoys some quiet time watching Noggin while eating his breakfast. But most importantly I’ll still be getting up at my usual time, which means some quiet time for me, hopefully time I’ll spend writing since I won’t have to worry about making breakfast and getting dressed first thing. The past couple of weeks, as I said above, we’ve all been burned out and the morning battles to get teeth brushed, hair combed, clothes on and everyone out the door on time, has really frazzled me. It’s very hard to think creatively when your brain was been fried by 8 a.m. so I’m looking forward to the break from the morning rush. 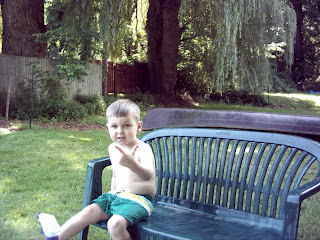 *Relaxed routine. One of the things that bothers me most about the school year is being a slave to routine. Right now it’s still light out at 8:00 when my kids go to bed-- and they don’t want to go. So it will be nice to be able to relax bed times a bit, and nice to not have to watch the clock all day long and worry about being back from running errands in time to pick someone up from school.

No more packing lunches and backpacks! LOL. Can’t help it, it’s just another one of those “slave to the routine” things I dread each day during the school year – packing my son’s lunch for school. He’s a picky eater so it’s a challenge each day to come up with something different – and healthy!—that he’ll actually eat. Cleaning out his back pack with him each day after school –all those papers they bring home, ugh! – and helping him to get it packed and ready for the next morning is another chore I dread. 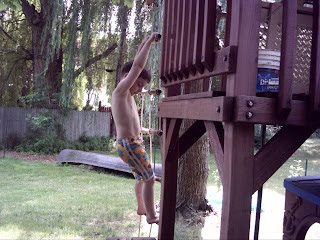 Speaking of my older son… I think one of the things I’m most looking forward to is having him home during the day again. Having him away at school for a full day this year took some adjusting for me, and even though he’s really good at pushing my buttons and fighting with me, he’s also incredibly sensitive and thoughtful – the first to notice if I’m having a bad day, or to join me for an impromptu song or dance, and (almost) always willing to help me with things around the house. And if nothing else, it will give my youngest someone else to pester all day long

Five Things that Kept Me from Blogging Last Week 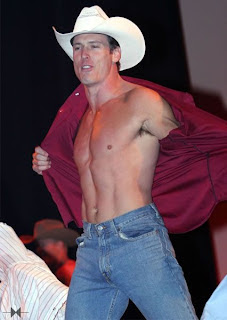 I took last week “off” from my day job as a sort of “vacation.” I work from home, so time off is really kind of redundant when you can’t afford to go anywhere for a real vacation. But the dh was off from his job as well, and I knew I’d be interrupted non-stop anyway, so I decided to give myself a break from my daily routine. Yeah. Snort. Last time I do that!

I had planned to blog last Friday about the five guilty pleasures I had indulged myself in during my down time. Staying up late watching movies with my hubby, sitting on my patio reading – a real book, not a work-related one. Things like that. Oh sure we had some little home improvement projects planned, but I had no intention of spending the entire time doing them. I have long since forgotten what it is to relax and planned to devote some time to rediscovering just how it’s done.

What is it they say about the best laid plans? Here are the five reasons I did not post a blog last Friday.

1. Painting. Not the Van Gogh kind, but the buy-a-gallon-at-Home-Depot-and-slap-it-on-the-wall kind. For seven years now I have slept in a cave. At least it feels that way when it’s dark out, or when you wake during the night. Four walls of knotty pine paneling and a dark hardwood floor. My hubby calls it our “hunting lodge”. I just call it gloomy. We’re in no position financially –and hubby isn’t the handiest guy around—to remove the paneling and put up dry wall. So we looked into painting over the paneling and argued for a few months over the color. Anyway, from the first brush stroke, I knew it wouldn’t go well. The color is great and the coverage is wonderful. But my husband is quite possibly the slowest painter in the universe. He also jumped the gun a bit and didn’t give me much time to clear things out of the room before he started. Add to that what I call his “little lady” attitude toward me painting (as in, “here now little lady, that’s no job for a woman!” No he doesn’t actually say that, he just comes across that way.) So ten days after we first started painting, the room is still not done (Did he listen to me when I told him that, in addition to primer to go over the paneling, we would also need primer for the wood trim, which we’re painting white? Uh… no.) My dresser and night stand are pushed into my very narrow upstairs hallway and most of my belongings are still hidden under plastic drop cloths. I’m not happy, despite the fact that the color has transformed that dark gloomy cave into a cozy country cottage . But it will be finished this weekend – because I’m going to finish it!

2. Unexpected vet bills. You know how hard it is to blog –or do anything creative -- when you’ve just blown an unplanned hole in your checking account? I have young pets, they’re not supposed to get sick! I had to take both Tanner and Gilbert to the vet last Friday morning for check ups. Tanner, for his annual check up and shots, and Gilbert to re-check the tumor on his ear. I also suspected Tanner had an infection in his ear (he gets those a lot) because he’d been shaking his head a great deal. Turns out he has a yeast infection in both ears. So four medications (pills for Tanner’s ear, his flea control stuff, and a cream for his ear plus a new cream for Gilbert’s ear) and more than $250 later, we were on our way home.

3 . Emergency root canal. Yes, this was Friday, as well. Those of you who know me know I’m a fanatic about oral hygiene. I’ve had to be. I haven’t’ had dental insurance for most of my adult life. I wasn’t taught good oral hygiene by my parents and had lots of cavities as a kid. I learned my lesson. So as an adult, I’m a real purist when it comes to brushing and flossing after every meal –it’s probably been more than 20 years since I’ve had a cavity. That all came to a crashing halt with my first – and last – sip of coffee last Friday morning. Holy friggin’ cow did that hurt! Never had any warning that anything was going wrong in there, but the pain got worse as the day wore on and – hey, I’m no fool. I’ve seen my husband go through this many, many times (he of the cavalier brushing and infrequent flossing). Long story short, I ended up rushing off to the dentist where he started to do a root canal only to have to stop because of so much infection in that tooth. Hah, and to think I never even felt sick until Friday morning. Sigh. So now I’m dealing with that, the rest of the root canal is scheduled for the 22nd – and my hubby is enjoying the heck out of this. Many, many times I have lectured him that if he would just take better care of his teeth, he wouldn’t have these problems. Oy! Does that one ever come back to bite you in the behind. As I was flossing before bed last night, he walked past the bathroom. Stopped. Smirked and said “Why bother? They’re just gonna fall out anyway.” Grrr.

4. In keeping with the day from hell that was last Friday... when I got home from said dental visit, after puking my guts out the whole way home (novocaine and I are not the best of friends) my kids came running to tell me Tanner had jumped through the living room window. Sigh. Not all the way through, and thank God, he’s fine. But we’ll have to replace that soon.

5. And the number five reason that kept me from blogging last week – hey, after all that you need another reason????? But since anyone who knows me has already heard these stories, if they were kind enough to stick with me til now, I’ll see if I can’t find a hot guy picture to post to at least make it worth their while.
at June 08, 2007 3 comments:

Wednesday on Writing: The Query

One question I am often asked is what are you looking for in query?   My answer, almost always, is this: professionalism.     What do ... 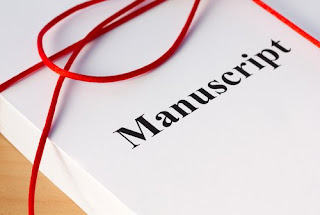